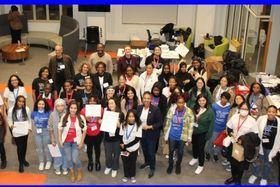 Both were a part of the top eight Franklin County High School Girls to win first place at the 2022 TECH CORPS Girls of Color Hackathon.

Congratulations to Rayan Amin, 10th grade, and Zainab Abdulkadir, 11th grade, From Horizon Science Academy High School on being two of the eight Franklin County High School Girls to win first place at the 2022 TECH CORPS Girls of Color Hackathon sponsored by the Franklin County Board of Commissioners and CoverMyMeds.


During the TECH CORPS Hackathon, students learned all about how to use a mobile app development tool and received support and guidance from all the technology professionals from the community.


They had two teams, “Blues Clues” and “Star Systers”, where each of our HSA girls was on each team. The “Blues Clues team developed an app called “Mentalife” this app allowed users to check their mood and physical health, as well as provide a safe place to journal or find resources on their mental health. Rayan Amin, 10th-grade HSA was on this team.


The other team was called “Star Systers”, they developed the “Career Query” an app that empowers users to learn more about career options as well as connect them to any experts in those fields to learn more and talk to them. Zainab Abdulkadir, 11th grade, HSA was on this team.


The winning teams were judged on their app’s functionality, design, and relevance as well as their overall presentation. The judging panel was composed of area professionals from Color Coded Labs, Columbus State Community College, Franklin County Office of Diversity, Equity, & Inclusion, Intel, JPMorgan Chase, and Ohio History Connection. Students received their certificates and awards from the state legislators and they got to meet and listen to state Rep. Mary Lightbody, Hearcel Craig, and others.